This is post #4 in the Senior Series. You can find the first three posts here. (Danny O'Regan, Matt Lane,Ahti Oksanen, Sean Maguire, and Mike Moran)

Senior Captain Matt Grzelcyk was the one of the few two year BU captain in history joining the likes of Jack O'Callahan in the late 1970's. Grzelcyk, like O'Callahan, was a local kid who grew up playing Charlestown just a few miles from Boston University and seemed to enjoy every second of playing at the school from a fan's perspective and from everything he has said to the media the last four years.

Read more »
Posted by quackquack at 9:22 AM No comments:

This is post #5 in the Senior Series. You can find the first four posts here(Matt Lane, Ahti Oksanen, Sean Maguire, and Mike Moran)


Danny O'Regan was one of the most consistent and prolific scorers in BU Hockey History. O'Regan put 154 points on the scoreboard during his collegiate career including atleast 10 goals in each of his four seasons. Every year, members of the media would have reasons why O'Regan wouldn't succeed or wasn't as good as his numbers indicated. He was a freshman forward coming right out of HS without much international experience during his first year on Comm Ave. His sophomore year people were asking if he could carry an offense without Matt Nieto on his opposite wing. His junior year was people questioning his development because his point production decreased from freshman to sophomore year. This past season I think Danny O'Regan was referred to a "passenger" in reference to playing with Jack Eichel last year the most times ever for a first team HE all star and the MVP of BU hockey for a season. O'Regan proved these people wrong time in and time out as he continually produced goals especially in crucial moments. From the two goals vs BC in the HE semis vs BC in his freshman year to the GWG in the NCAA first round OT win over Yale last season, O'Regan was always sniffing around the net looking for a goal whether it was pretty or not.

Read more »
Posted by quackquack at 8:52 AM No comments:

This is post #4 in the Senior Series. You can find the first three posts here(Ahti Oksanen, Sean Maguire, Mike Moran)

Matt Lane is the exact type of player that college hockey teams need to be successful. He came in as a freshman that was a bit outshadowed on his U-18 team that included the likes of Seth Jones and Jacob Trouba amongst others. Lane arrived at BU and from day one he could skate with anyone in college hockey. He was a similar type player with Cason Hohmann in that he was a small, fast skater who had to work hard to develop his scoring touch during his time at BU. Lane's points, goals, and time on ice increased over each of his four seasons ending with him playing a crucial Top 6 role this past season as an assistant captain. Current coach David Quinn mentioned Lane as a hard working leader numerous times throughout the last season even going out of his way to mention Lane's improved shot which resulted in 14 goals this season.

Read more »
Posted by quackquack at 1:59 PM No comments:

This is post #3 in the Senior Series. You can read Sean Maguire's here and Mike Moran's here.

Ahti Oksanen came to BU an unknown Finnish defenseman recruited to fill the void left by Colby Cohen signing a professional contract. He left as a fan favorite forward who lead the  NCAA in shots on goal as a senior. He is now one of the most sought after undrafted free agents in the NHL and will certainly have his choice of team when he feels ready to make his decision.

Oksanen continued to improve despite changes through his career. After his freshman year, the coaching staff was changed from legendary Jack Parker and associated head coach Mike Bavis(who recruited Ahti) to current head coach David Quinn. Quinn kept Ahti on defense for a full year before making the switch to have Oksanen play at forward for his junior and senior seasons. Oksanen was hesitant at first and even went as far as practicing on defense the entire summer before his junior season despite Coaches Quinn and Steve Greeley reinforcing to him that he would be a forward.

Read more »
Posted by quackquack at 11:09 PM No comments: 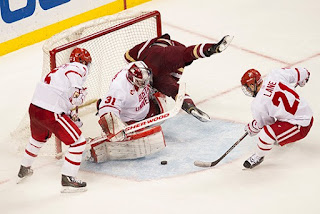 Photo by Jackie Riccardi - www.bu.edu
- Classic Maguire throwing BC over his shoulder

Sean Maguire was a critical part of BU hockey from the time he arrived on campus. The netminder from Powell River, British Columbia contributed from the get go as he appeared in 62 games over the course of career on Comm Ave. Maguire sat out last season due to a concussion suffered in 2014 but still held atleast a .919 save percentage in each season that he was healthy for the Terriers. Maguire is a fourth round 2012 draft pick for Pittsburgh who will either sign with the organization before 8/15 or become a UFA at that point and be eligible to sign with any organization. He always gave me the feeling that he could stand on his head for BU at any moment to keep them in a game. This happened in the Beanpot this past year. He also was fantastic in the 2013 Hockey East championship vs Lowell in Jack Parker's last game at the garden giving BU every chance to beat Connor Hellybuyck(I don't care enough to look up how to spell his name).

Read more »
Posted by quackquack at 10:21 PM No comments:

This is the first post in the 2015-2016 Senior Series. Posts on Matt Lane, Ahti Oksanen, Danny O'Regan, Matt Grzelcyk and Sean Maguire will follow. 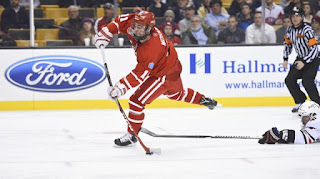 Mike Moran may seem like your typical fourth line grinder but he certainly is not. Moran was destined to play on Comm Ave since he was born into a family full of BU hockey players including both of his uncles Mike and Mark Bavis. Mike, who he would play for during his freshman season and Mark, who he would honor with his jersey number.

Moran came to BU as a 21 year old freshman when most of his classmates were 2 or 3 years younger than him. He had to play a year after graduation from high school in the BCHL and EJHL for three different teams to convince the BU coaching staff including his own uncle that he belonged. his 46 points in 39 BCHL games certainly proved that. He wasn't given a spot because of his uncles. He earned it and was a critical player for BU over his four year career. He was a stable presence on the fourth line always finding a way to make a positive play whether it was a goal, a chip out of the zone or a faceoff win. Moran arrived on campus in the fall of 2011 and contributed to the team from the very beginning. He wasn't the offensive scorer of some of his classmates like Danny O'Regan or Matt Gryzelcyk but he certainly found his niche as a fourth line grinder who could play the defensive style of the game very well. His 25 career points certainly are not going to jump out at you but he always seemed to find a way to score in the biggest games. His biggest goal scored  was probably in the Beanpot Final last year to open up the game that BU would eventually win in OT. He also scored from below the goalline on BC's Thatcher Demko last season in a BU win at BC.

Read more »
Posted by quackquack at 2:04 PM No comments: