Why Your Team Sucks: Merrimack

Your team: Merrimack Warriors Hockey
Your 2015-2016 Record: 13-19-7 (5-10-7)
Your 2016-2017 outlook: They could possible be better but they will probably still sucks. Last year Merrimack got terrible goaltending throughout the year and anybody who knows the defensive style that Merrimack plays knows that they do not have the offensive firepower to overcome bad goaltending. You would think with this information Mark Dennehy and that fine Boston College degree of his would put two and two together and go get a better goalie since his returning started, Collin Delia, ranked 12th in GAA and dead last 15th in save % of qualifying goalies last year. If you thought this you would be incorrect. Dennehy and co are bringing in 6 forwards and 2 defenseman in this year's freshman class.

Read more »
Posted by quackquack at 10:53 PM No comments:

Why Your Team Sucks: UNH 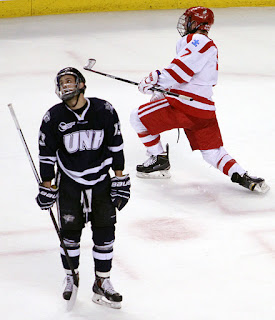 Your team: UNH Wildcats
Your 2015-2016 Record: 11-20-6(4-12-6)
Your outlook: Not any better than last year. The Wildcats, who finished 10th last year, were picked to finish 10th in the conference again this year. If not for Maine and UMass just being garbage programs, they could easily have finished even worse. UNH was 6th in the conference in scoring offense before losing 3 out of their 5 20+ point scorers including leading scorer Andrew Poturalski. The problem with losing that much offense and not having the incoming class to replace it is that the defensive corps ranked 10th in the league and aren't gaining any playmakers. The best incoming freshman for UNH are forwards Liam Blackburn and another Van Riemsdyk who I just assume will be good since his two older brothers were. The defense will continue to struggle leaving junior goalies Adam Clark and Danny Tirone out to dry.

Read more »
Posted by quackquack at 2:11 PM No comments:

Your team: Maine Black Bears
Your 2015-2016 Record: 8-24-6(5-15-2)
Your 2016-2017 outlook: Maybe worse than last year. Like UMass, it will be tough to be worse than last year's team but certainly anything is possible for a team this untalented and bad at hockey. They only return two players who recorded 15+ points last year and their freshman class is uhhh lets just say Paul Kariya isn't working through that door. Pat Shea is a freshman who will be probably be the most likely to contribute out of the gang of misfits. They are fighting an uphill battle on a team that ranked 56th offensively and 50th defensively in the country last season. Jake Pappalardo is also a freshman who could make an impact but the definition of freshmen impact is much different in Orono now than at any top tier Hockey East school.

Why Your Team Sucks- UMass

In case you don't get around the internet much, this a clear worse version of what Deadspin does with the NFL each year

Your team: UMass Minutemen Hockey
Your 2015-2016 record: 8-24-4(2-16-4)
Your 2016-2017 outlook: Probably not all that much better than last year..or the year before or the year before that. UMass has sucked for basically 10 years since Jonanthan Quick got the hell out of the boring ass town of Amherst, MA as soon as possible. This has been par for the course for every NHL ready or even close to ready prospect at the state's flagship school. Who is the last Minuteman who was borderline to turn pro or return to school and actually came back to school? Frank Vatrano, Brandon Montour, etc. Kravchenko probably tried to get kicked out this year just because he couldn't stand it anymore. You could continue to lose A LOT in the middle of nowhere or you could go make six figures. Easy choice even for a UMass student.


Last year, Umass had 8 wins all year including only two in conference. They should get credit for another as they did beat 11th placed Maine once out of 4 games(it was a third place tournament game in New Jersey). Anyone who attended a third place tournament game between Maine and UMass in the state of New Jersey either has absolutely no life or just loves watching train wrecks of hockey teams. Speaking of train wrecks, two of their other wins came against Colorado College who somehow manages to make UMass look like a real hockey team twice a year. Their other wins came against Army in OT, UConn X 2, AIC and Sacred Heart. For those keeping track at home, approximately 0 of those wins comes against teams with a record above .500 or even close to it.

UMass continues to schedule juggernauts this year with out of conference games against the likes of Army, Princeton, Alabama Huntsville and D-1 newcomer Arizona State. They also are playing in a tournament in Belfast Ireland. My question for tournament organizers is that haven't the Irish people been through enough? Famine, wars, terrible weather and now UMass hockey. Very sad state of affairs for all of Ireland that weekend when the train wreck hockey program rolls into town.

UMass loses six players( four of which had to be kicked out of the program) from the program which account for 33% of the points on an 8 win team that was a combined -62 on the season. I am no hockey expert but that doesn't sound like a recipe for success unless you have a bunch of first round picks coming in that year(oh that's only a BU thing). The chances UMass has a successful season this year is the same chance they have at having a full student section in a third period..0%


Read more »
Posted by quackquack at 9:52 AM No comments: