There is a series of weekly awards that we gave out all of last season.A little late to get started this year but here you go.

Greg Jennings Award- given to the Terrier who best exemplifies the qualities of Greg Jennings through doin' shit and putting the team on his back. (YOU CAN'T STOP HIM).

Winner- Matt O'Connor- OC stopped 67 of 69 shots this weekend backstopping BU to two big non conference victories. O'Connor had great rebound control which he has had his struggles with in the past. It was even more impressive that he picked up his first career shutout in his first game back from a lower body injury when Coach Quinn admitted that he had not practiced much before returning to game action. O'Connor was the difference maker for the Terriers this weekend.

Joe Pereira Trophy- Given to the Terrier who, through grit, hard work, and determination helps the team to victory on and off the scoresheet. Just like Joey did. (Interview can be read here)

Winner- Matt Lane- Lane was steady and gritty for the Terriers all weekend. The thing everyone will remember is the tip game-winning goal against Michigan but he was great on the PK and centering the third line both nights. He is solid on the forecheck along with his linemates (AJ Greer/Nick Roberto and Nicholas Olsson).

Read more »
Posted by quackquack at 10:45 PM No comments: 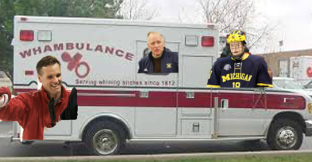 BU took care of business this weekend as they picked up two big nonconference wins over Michigan St. and Michigan at Agganis Arena. Friday night, BU dominated play but were only able to pot one goal due to solid play from Michigan State goalie Jake Hildenbrand and a lack of a finishing touch. Thankfully, that one goal was enough to win as Matt O'Connor returned from injury to pick up his first career shutout. BU's defense was very strong Friday night as Sparty had little to no quality chances on O'Connor. Ahti Oksanen potted the lone goal early in the second period on a sweet backhander off a pass from Jack Eichel.

Saturday night's game was one of the best hockey games I have seen in a while. Jack Parker probably would have said "that was a good college hockey game" if someone asked him what he thought of it. BU edged Michigan 3-2 on a late Matt Lane tip goal off a Brandon Hickey shot. Michigan scored both of their goals on the powerplay as the referees did BU no favors through two periods. Ahti Oksanen tied the game after the first Michigan powerplay goal but Michigan would take the lead again the second on another powerplay goal after a questionable call by Dave Hansen on Chase Phelps for a "hit from behind". BU tied the game up early in the third on a great tip by Jack Eichel off a Doyle Somerby shot. Lane would give BU the gamewinner with 3:30 left on a tip off a Brandon Hickey shot. Hickey thought he scored the goal and therefore had the best celly for an assist of all time. The third line got switched up on Saturday night as Quinn moved Roberto up to the line with Matt Lane and Nicholas Olsson,who has been great so far, and the move played off as they delivered the game winning goal.

Read more »
Posted by quackquack at 9:23 PM No comments:

This weekend #12 ranked BU hockey will host Michigan State and Michigan for a pair of out of conference games at Agganis Arena. Michigan State comes into this game 1-1 after splitting a pair with UMass last weekend. Michigan comes into this game with a 1-2 record after splitting with UNH at home last weekend. They lost game 1 5-1 before bouncing back to win 2-1 in the game Saturday night.

These are two games that BU should expect to win and dictate the pace of the game. Michigan State struggles defensively where BU's deep forwards should have a field day against a defensive corps who gave up not 1 but 2 Top 5 plays of the week to UMass last weekend. This year's UMass team certainly isn't the '93 Maine team either so there should be plenty of opportunities for BU's forwards to take over this game.  Up front they do have some guys who BU will have to pay attention to in Matt Berry(4-2-6), Michael Ferrantino(1-3-4), and Mackenzie MacEachern(1-3-4). They all torched UMass' D last weekend and will need to be kept in check to avoid the game from turning into a shootout. Sparty has Jake Hildenbrad as their main goalie again this year and he is nothing to be afraid of. Michigan State beat BU 2-1 in a game in East Lansing last season but official prediction here is 6-2 BU. Eichel is the King Xerxes to Sparta's 300 except now they only have 6 so they have no shot.


Read more »
Posted by quackquack at 4:33 PM No comments:

BU hockey continued to score goals at a scary pace as they beat the US U-18 team 6-4 in an exhibition game at Agganis Arena. Freshman and former U-18er Jack Eichel paced the way for BU with two goals and one assist. The OREO(O'Regan-Eichel-Oksanen) line was out on the ice for 4 of the 6 goals scored and showed their ability to take over a game when they need to. The Rodrigues-Baillargeon-Hohmann line was also very good as they potted the other two goals. I thought that the 3rd and 4th lines were also pretty good even though they didn't get on the score sheet. Matt Lane stood out to me as having a good game on that third line with Nikolas Olsson and AJ Greer. 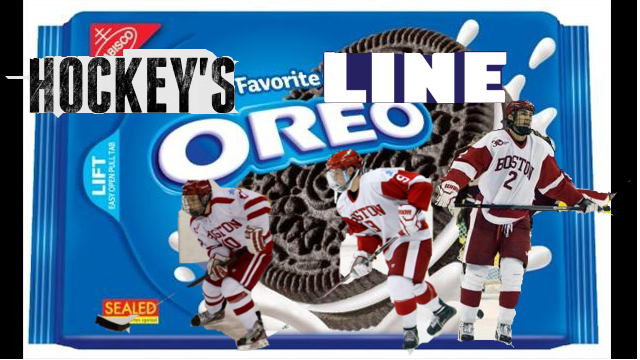 
The BU Terriers have an odd weekend in their schedule as they only have one game on the slate this weekend and it is an exhibition game. While I am sure all of the fans would prefer to have a game that counts this weekend, it is an opportunity for the team to continue to gel and generate chemistry and also a huge recruiting tool for the coaching staff. The USA U-18 team is full of the best prospects in the country including future Terriers Jordan Greenway and Charlie McAvoy. It will also be an opportunity for current Terriers Jack Eichel ,John Macleod, Matt Grzelcyk, and Matt Lane to play against their former program.

The most important part of the game is how the Terriers play as they need to continue to play well to carry their momentum from last weekend into a big weekend set with Michigan St and Michigan. That weekend is followed by a home and home with PC and a game at BC. Needless to say, the Terriers needs to keep dominating their opponents to keep the momentum going.

What to look for:

1. The health of Matt O'Connor- Chances are that he will be held out if any part of his injury from last week is lingering but if he plays, I would certainly consider him 100% for next weekend against Michigan St and Michigan

Read more »
Posted by quackquack at 11:43 AM No comments:

If BU hockey fans weren't giddy enough with a 12-1 win in an exhibition game last weekend over St. Thomas, they/I have even more  reason to be optimistic about the hockey team on the better end of Comm Ave. Friday night, the young Terrier team(10 freshmen in the lineup) traveled to Amherst in front of a hostile crowd at the Mullins Center. Thing started off well for the Terriers as they held off an initial UMass surge to score their first goal of the season on a Robbie "Carrots" Baillargeon tap in goal on a nice pass from Cason Hohmann. Linemate Evan Rodrigues had a secondary assist  on that goal as well as a great set up for Nikolas Olsson's first collegiate goal. Rodrigues pulled off one of his favorite dangles where he pulls the puck from forehand to backhand through his legs and set up Olsson who I thought showed some nice finishing skills for a 3rd or 4th line player.

Things got more interesting as UMass added a later second period goal and went on a powerplay as the result of a John Macleod phantom penalty call. Macleod took two other penalties which Coach Quinn can't be too happy with. BU's most skilled guys took over the game in the third period after killing the penalty. Freshman Jack Eichel scored on a great play and shot and then made a great play to set up Danny O'Regan. Eichel would then score again to put the game out of reach at 5-1 but BU would not stop there as they added goals from Cason Hohmann, another from O'Regan, and 17 year old freshman AJ Greer.


Read more »
Posted by quackquack at 5:39 PM No comments:

The Hockey East First and All Rookie teams have already been released along with the coaches and media poll for the conference standings. These are all well and good but nowhere near the importance level of the annual BSRS Hockey Least Awards.

- Now you may think this is wrong to pick on the newest member of the conference in their first full year in the conference but Cavanaugh is a former BC assistant so any normal guilt we would feel about making him our pick is out the window. He also seems to be up to some questionable scheduling tactics based on the timing of the BU game at UConn(3 pm start after BU plays at 7 the night before and UConn plays at 2) which makes us feel less bad about this. UConn will struggle in HE this year and we will be the first to start the fire Cav movement. 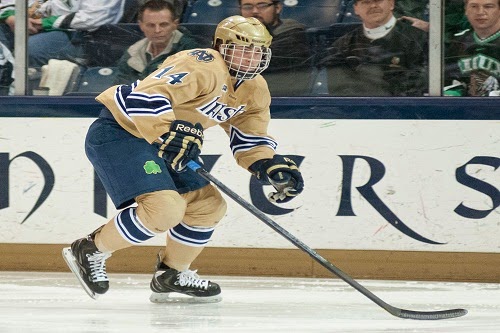 -Di Pauli was supposed to be a be a solid recruit for the Fighting Irish but has put up a solid 17 points in 2 seasons in South Bend. The Washington Capitals draft pick has struggled to put up points as a drafted forward which makes one wonder what his actualy purpose on the ice is. We expect more of the same this year for Di Pauli in South Bend. What an overrated duster.

The BU Terriers destroyed St. Thomas in an exhibition game at Agganis Arena on Saturday. The preseason affair was the first chance for most Terrier fans to see the extremely talented 10 man freshman class that coach David Quinn and Co. have brought in for this season. It was also the first chance for many to see Ahti Oksanen as a left wing but he certainly did not disappoint as he potted 4 goals past Tyson Teichmann in the first 25 minutes of the game. All four goals were setup by freshman stud Jack Eichel who made the game look easy against the outmatched St. Thomas Tommies. Freshman Nicholas Olsson, Chase Phelps, AJ Greer and John Macleod also added goals for the Terriers throughout the rout. Returnees Kevin Duane, Nick Roberto, Robbie "Carrots" Baillargeon, and Dillon Lawrence also added goals to complete the 12-1 route.

Read more »
Posted by quackquack at 11:54 AM No comments: