The BU Terriers went into the weekend with a chance to lock up their first two trophies of the 2014-2015 season. They partially achieved one and won the other. First, the Terriers tied and lost to Notre Dame at Agganis Arena in two games that they dominated in possession and scoring chances. Notre Dame freshman goalie Cal Peterson kept his team in both games and Notre Dame, per usual ,took advantage when they did get opportunities. BU outshot Notre Dame 82-41 over the two games but only came away with one point which turned out to be enough to clinch a share of the league title.The Terriers now need just one point from their two remaining league games to clinch  the outright league title and the #1 seed in the Hockey East tournament. Now, a lot of people were worrying about the state of the team after the 1 point weekend but they straight up dominated Notre Dame and just got no bounces. That isn't anything to worry about. As a point of reference, BU had over 20 more shots in two games this year against Notre Dame than they did in three games last year. They just didn't get the bounces or finish their chances. This hasn't been a prolonged problem all season and I don't think it will start now. Notre Dame is going to be a tough out in the Hockey East Tournament but I'll take a freshman goalie not standing on his head like that again. The real reason to want to avoid Notre Dame in the conference tournament is because they play the most boring style of hockey ever and they make me want to go watch paint dry instead of watching them play. 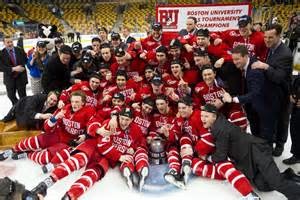 Read more »
Posted by quackquack at 11:23 PM No comments:

The #3 BU Terriers split with the University of New Hampshire over the weekend in a home and home series. Each team held serve on their home ice with the Terriers winning 6-3 on Friday and UNH holding on 4-3 Saturday. Friday night was a quick start for the Terriers as Cason Hohmann put two in the net in the first eight minutes of the game. Unfortunately, the Terriers were sloppy defensively and allowed to UNH to tie the game 3-3 midway through the second. Matt Grzelcyk, who had three goals on the weekend, scored the gamewinner on the powerplay late in the second and Brandon Hickey added an insurance tally early in the third as the Terriers locked the win with solid defensive play in their own zone which they lacked in the first two period.

Saturday night, the sloppy defensive play continued as UNH sprung to a 4-0 lead through two. The chances were relatively equal but UNH capatilized on there and limited defensive breakdowns while BU did not. As always, this team fought back and made it a 4-3 game with 7 minute to play after two Grizz and an Evan Rodrigues goal on a great slap pass from John MacLeod. They were never able to tie the game though as they hit 3 posts throughout the game and just missed on numerous other opportunities. They were also robbed of a offensive zone draw on a missed icing call with 18 seconds left when it was ruled that a clear ice by UNH was tipped when it clearly wasn't. You can say that it may not have made a difference but a team that has scored in the last 5 seconds to tie the game versus Wisconsin certainly had a better chance than most to tie it up. If the linesman was unsure of the call, he should have called the icing and then conferred with the other officials. I don't think  that type of play is reviewable but if you call icing and rule it was tipped, you can put the draw in the neutral zone without having any real impact on the game. Instead, it was waved off and BU was forced to start a rush after believing the play was dead with 11 seconds left. You can see the play at the 3:30 mark of the second video below. The officiating has done BU no favors thus far this season which is obvious with this call and the fact that BU has had 16 less powerplays than it's opponents so far this season. John MacLeod and Doyle Somerby get penalized and sometimes suspended for being bigger than the guys they hit so next time an opposing fan whines that BU has the refs in their pocket, tell them to shove it up their ass because it's just not true. Even EZAC refs have cost BU a goal in the Beanpot as they refused to blow the whistle on clear possession by BU after a delayed penalty was called. No matter what though, Northeastern fans will be full of excuses come Monday night around 10:30.

Read more »
Posted by quackquack at 11:11 AM No comments:

UNH Preview, A Chance for Hardware 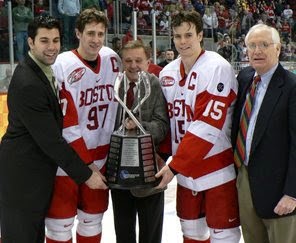 
The Boston University Terriers have a chance to win their first Hockey East Regular Season title since the 2008-09 season this weekend as they begin a home and home with the University of New Hampshire No Hardware. The Wildcats have struggled throughout the season and their 10-16-2 record shows it. It appears the biggest problem with Dick Umile's Wildcats is their inability to keep the puck out of the net specifically in the second and third periods.  They have allowed 80% of their goals against in the second and third which is not good to say the least. Their best goalie has a .900 save percentage which would be good enough for 14th best in Hockey East if he played enough minutes. Needless to say is the BU revenge tour needs to continue to roll against an opponent who they should dominate both nights. New Hampshire has 6 competent players in their lineup with Willows, Downing, Poturalski, Kelleher, and Thrush up front and with Matias Cleland on D.

As for BU, UNH doesn't have the defense or the goaltending to contain the Hobey Hattrick Line(Erod-Eichel-O'Regan) but I would expect big weekends from some of the secondary scorers. The second line of Oksanen- Baillargeon- Hohmann is clicking right now getting on the board in the last 3 games. I would also expect a big weekend from Brandon Hickey who has been great as of late for the Terriers. He may have the best one timer from the blue line in the league. BC can have Hanafin, I'll take Hickey, MacLeod, Fortunato and Diffley.

Now enough about how much UNH is embarrassment to Hockey East and how much better BU is than them.  What does BU need to do to clinch the Hockey East Regular season title this weekend?

The #3 BU Terriers were all over the UMass Lowell Riverhawks early and often Friday night in the great city of of Lowell. Ahti Oksanen scored his 18th of the year less than a minute into the game on a great look by Cason Hohmann. Evan Rodrigues would score the first two of his 3 in his natural hattrick later in the first to give BU a 2-0, 3-0 and eventually 4-0 lead. Lowell made a brief push early in the third to make it 4-2 on powerplay and even strength goal. BU would add another insurance goal on a powerplay goal from Matt Lane to seal the game for good. Jack Eichel had three primary assists on the night to bring his point total on the year to 43 while Rodrigues' 4 point night brings him to 40 on the year and 100 for his career.

Read more »
Posted by quackquack at 8:20 PM No comments:

The Boston University Terriers continue to roll through the regular season with two more victories this past week to extend their winning streak to 5 games and improve to 17-4-4 on the season. Friday night, the first place Terriers faced off against the last place UMass Minutemen. BU scored early and often on the weak UMass defense and goaltending. The Terriers had both 2-0 and 3-1 leads. UMass showed some resiliency and fought back thank to some loose BU defense and took two different leads in the third period of 4-3 and 5-4. BU would then go on to score 5 goals in the last ten minutes for a wild 9-5 victory. It was certainly an entertaining game to watch but probably a terrible one to coach as Coach Quinn said after the game. 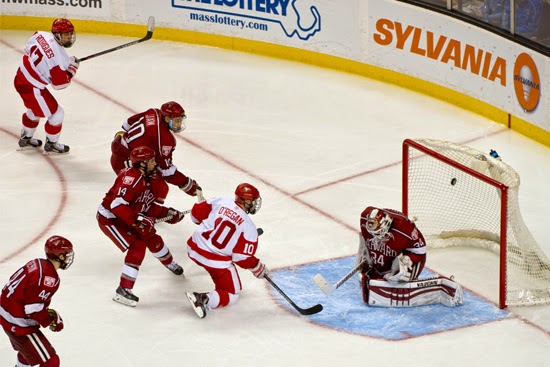 The scoring was lead by junior winger Ahti Oksanen who had his first collegiate hat trick as well as freshmen Jack Eichel and Brandon Hickey who both had two goals. Hickey is one of the most underrated defenseman in all of college hockey as he has a great low shot and has shown more and more of an ability to jump into the offensive zone while also being great in his own zone. You really can't praise the freshman as a group enough this season. Lead by Hobey frontrunner, Jack Eichel the class has contributed from the beginning of the year and only gotten better since.

Read more »
Posted by quackquack at 12:28 PM No comments: