BU takes 2 out of 3 for the week, prepare for PC

The BU Terriers took two out of their three games this past week as they split with UConn with the away team winning each matchup before beating a top 10 Harvard team at Agganis Arena. Junior Connor LaCouvee won both games for the Terriers raising his save percentage to .938 in four games. The Terriers now sit 7-4-1 on the season and currently 8th in the way too early pairwise rankings. Now obviously despite the high  pairwise ranking, losing games to teams such as UConn was not part of what any BU fan had in mind at the beginning of the year. The team has disappointed at times as they learn how to win and respond to adversity but with that said if these games are the low points as the team gets better and healthier with the return of Clayton Keller, Nik Olsson and Co. over the next month then this can still be a hell of a team this year and still is a national championship competitor.

Some fans on certain online forums will tell you right now that anything less than perfection means the coach should be fired and all the players aren't as good as everyone thought. I can say with certainty that 30 NHL gms and numerous NCAA coaches were not wrong on the amount of talent that BU has or how good of a coach David Quinn is. This team is very talented and has consistently brought the effort of a championship team. They got a bad break on the first goal against UConn with a lack of a tripping call and never really recovered despite dominating the first 30 minutes of the game but if that is the low point of the season, I will take it in a heartbeat. Moral of the story is fans on the internet are idiots besides me, I'm a genius.

The BU Terriers took 3 out of a possible 4 points last weekend in a home and home with their little brother/Northeastern. BU played well offensively both nights but played more disciplined and defensively responsible on Saturday night which lead to a 3-0 shutout win after a 4-4 tie on Friday night at Matthews Arena. Jordan Greenway, who scored the go ahead goal before taking a misconduct penalty while celebrating was benched for the first period of Saturday's night game by Coach Quinn who appeared to want to send a message that any type of celebrating penalty will not be tolerated.

Overall, it was a good weekend for the Terriers who got their first points in league play and continued to show flashes of dominance which will hopefully turn into stretches of dominance and then eventually complete game dominance by March and April. The biggest story out of the weekend was on the injury front as Clayton Keller suffered a knee injury has been termed out 'long term' by coach Quinn. This is obviously bad news for BU as Keller is their second leading scorer and plays on its top line with Jordan Greenway and Patrick Harper. It is being rumored that it is a MCL injury that will keep Keller out weeks to months. This would put Keller out until the beginning of the second semester but I think this injury can actually help BU long term or I'm just trying to convince myself of that. So here comes the spin zone (brought to you by Evan Rodrigues Inc)

Read more »
Posted by quackquack at 2:48 PM No comments:

The 3-2 BU Terriers return to action this weekend after a week off from gameplay against their Beanpot opponent and little brother Northeastern Huskies. The Huskies come into the matchup 3-2-2 on the year the popular pick among many people to be one of BU's toughest competitors this season. The probably for Northeastern is that BU has dominated them forever(161-58-8) and especially since David Quinn took over at BU. The Terriers are 7-1 against the Huskies over the last three years with the one loss in a 6-5 game at the end of 2015 season when BU had all but clinched the Hockey East regular season title. 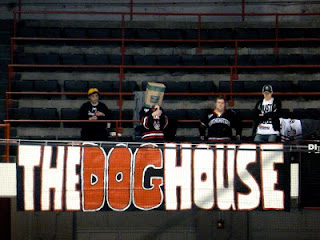 Read more »
Posted by quackquack at 10:38 PM No comments: