The BU Terriers took 3 of 4 points from the UNH Wildcats this weekend after tying them Friday night in Durham before returning home Saturday to get a crucial league win. Friday night was a game that BU dominated in every aspect but the scoreboard. They outshot UNH 40-22 but had some crucial breakdowns that led to some great chances for UNH. Coach Quinn commented on that after the game noting that UNH's goals were too easy while BU had to work for theirs. The Terriers also dominated overtime but could not get one past UNH goalie Daniel Tirone who made some very good saves for the home team. Danny O'Regan had a hattrick for the Terriers as he continues to lead the team in points and has taken his play to an even greater level playing with freshmen Jordan Greenway and Jakob Forsbacka Karlsson.

The Terriers continue to battle and gain points despite battling through a rash of injuries as of late. Senior goalie Sean Maguire was out this weekend with an upper body injury but Quinn said postgame Saturday that he should be back next weekend. Obviously not a sure thing but that will be very good news to have Maguire back who has been very good since January. Robbie Baillargeon was also out for the weekend with a lower body injury which seems to be more of a long term injury at this time. Brandon Hickey was injured Friday night on a dirty hit by UNH forward Shane Eiserman. Eiserman hit Hickey square in the back about 4-5 feet from the boards. Hickey left the game and did not play Saturday night for BU. The league still refrained from suspending Eiserman for no reason. They have every reason to suspend him for that hit. It is a hit that should not exist in any level of hockey. They were quick to suspend BU freshman D Charlie McAvoy in the fall for a questionable hit but have done nothing regarding Eiserman's. I would say that McAvoy's hit was much less dangerous as well but since PC coach Nate Leaman wanted to bitch and moan at the time, the league acted quickly. Coach Quinn didn't complain about the hit because he is more concerned with winning hockey games than whining like the rest of the coaches in the league. Hopefully the league will take another look at the hit and suspend Eiserman.

Read more »
Posted by quackquack at 8:29 PM No comments:

The BU Terriers lost just their second game since the winter break as they dropped a 1-0 OT heartbreaker to their archrival in the Beanpot Championship game. There really is no positive way to spin a loss like this. It sucked. It was a great,entertaining hockey game but the outcome was the opposite of fun. It made me want to go puke into a bush outside the TD Garden. It is never fun to lose a game like that. That's all there really is to say on that. I am not bulimic so I am not going to put myself through every little detail of reviewing that game. 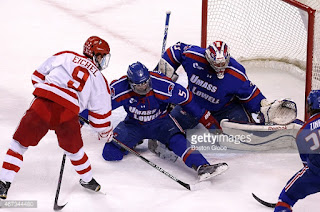 The Terriers return to action this Friday against UMass Lowell in a huge home and home series that will have large implications on who earns the byes in the first round of the HE tournament. Lowell is currently three points ahead of the Terriers for the fourth and final bye but the Terriers do hold two games in hand on the Riverhawks. What's good news for BU is that Lowell also may be the most overrated team in the country. They have beaten 2 current NCAA tournament teams so far this season. They are coming off a home loss to UNH. These are two games that the BU Terriers need to win. They need it to move on from the tough loss Monday night and to continue to climb up the Hockey East standings to secure the first round bye in the tournament. Lowell is typically well coached especially under Norm Bazin but they do have flaws and few difference makers. Their weakness appears to be in net with UMass transfer Kevin Boyle. Boyle got beat routinely by teams last year by getting him to go down and then firing 5 hole. I would expect the Terriers to try to open him up and then beat him five hole like they did atleast 3 times in the HE championship last year.

Read more »
Posted by quackquack at 11:57 PM No comments:

Terriers roll along in league and to Beanpot Final

The BU Terriers continue to roll along in the second half of the 2015-2016 season with a pair of wins this past weekend against Merrimack and vs Northeastern. The win vs Merrimack Friday night was a dominating effort from the Terriers as they beat up on a less skilled Merrimack team who has been struggling as of late. The Terriers jumped out to an 1-0 lead on a Robbie Baillargeon goal and really carried play from there. A Danny O'Regan shorthanded goal less than six minutes into the second really opened it up for BU. They would add goals from fellow seniors Matt Lane and Ahti Oksanen to secure the 4-0 victory.

The weirdest part of the game was that senior Sean Maguire did not get the win or the shutout despite starting and finishing the game without giving up a goal. Sophomore Connor LaCouvee had to come on for a five minute span in the first period due to a skate issue for Maguire. Maguire would return but not be eligible for the shutout or the win due to the missed time. It was really a weird set of circumstance which isn't surprising given the goalies involved #letsgetweird

Read more »
Posted by quackquack at 3:24 PM No comments: