Boston University is the place to be for a NHL draftpick

We are now in the middle of the slowest time of year for college hockey in terms of games played but it is the most important time of year for most of the high profile programs. Many of the top recruits in the country are choosing between colleges where they have committed(probably BU if they are a top recruit) and signed National Letters of Intent and the Canadian Hockey League. This is especially true for BU this year as they will have 4-5 first round draft picks in the coming 2016 NHL draft. These high draft picks are always the most highly sought after by the Canadian hockey league who recruit the players by saying whatever they need to say to convince the players to come north. A CHL GM job requirements are the exact same as a used car salesman as they will say and do anything to get a player on their team. 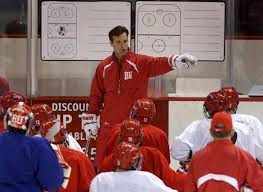 This will especially be true this year with soon to be BU freshman Clayton Keller who is also drafted by the Winsdor Spitfires who are the host of the Memorial Cup next season. Their GM/snake oil salesman has said that Keller is the team's " top priority. He is the team's best player". To translate this from CHL it means he is going to throw the kitchen sink and probably some under the table cash at Keller to try to get him to go north. Things seem bound to really heat up once Keller and classmates Kieffer Bellows and Dante Fabbro are drafted next month as certain teams teams located in Canada or run by idiots favor the CHL historically over the NCAA while other franchises such Florida, NJ, etc seem more prone to allow the players to develop in the NCAA. Keller is a smaller forward who will definitely excel and succeed in either league he chooses. The question for Keller or lack there of will be where he wants to do that. Obviously I have no idea what is going through Keller's head or how much devalued Canadian money is being dropped on his doorstep this summer. The decision really comes down to that Keller can go to BU and play with 9 top 3 round NHL draft picks(5 being his classmates) and work out with a former NHL strength and conditioning coach to get stronger which he will need as a smaller sized forward or he can go play a full 80 game schedule while tooling on 16 year old defensemen. He will definitely score more points in the CHL but will he be more ready for the NHL when he chooses to make that jump than he would coming from BU? Probably not. Also, the Winsdor Star wrote the above mentioned article basically begging him to come to Windsor quoting his friend Logan Brown and detailing how he has been trying to recruit Keller. Keller is not quoted in the article but there is a clearly a big push coming from all different parts of Windsor to get him. We did not reach out to Keller for this blog post because we aren't slimy Canadians.

The same can be said for Bellows who has idiotic Portland fans writing open letters to him to be more like his dad. Kieffer Bellows isn't his dad. He is going to end up a very good NHL player like his dad regardless of which way he goes. He doesn't have to make the same exact decisions as him. This is like saying that you should work at McDonalds because your parents did and they turned out to be the CEO later in their career even if you have the chance to join a company as a VP right out of school. The WHL does not represent more of a challenge for Bellows. He will be challenged and allowed to develop more physically in NCAA with less games and more time working out. The dumb fan makes the point that Bellows dad did win a Memorial Cup which is cool but is it really more impressive or fulfilling than a NCAA championship to an American? I get the Memorial Cup is a big deal in Canada but it might as well be a cereal bowl south of the border. Bellows and Keller, who were linemates with the U-18's this year definitely will be given top 6 minutes at BU next year and play in every situation similar to Jack Eichel(may have heard of him) did his only year on Comm Ave. Eichel just played in 81 of his team's 82 games scoring 56 points in his rookie year as a 19 year old.

Read more »
Posted by quackquack at 8:26 AM No comments: