This is the time of year where journalists and fans start posting their projections for each conference. We took the time to decide on our pre-season rankings as a blog. We realize we are early by a month but we have a Pre-season Hockey Least team to decide in the next month. Pre-season polls mean absolutely nothing as the defending champion is almost always the consensus #1 both nationally and in each conference no matter how much they lost from the year before. Exhibit A here. That 09 BU team was picked to finish 2nd behind BC. They went on to post 35 wins and a National title while BC went on to post 18 and miss the tournament all together. 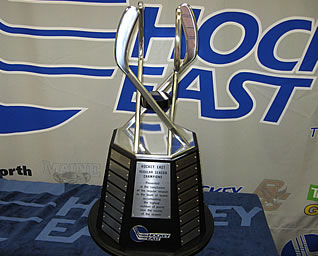 Feel free to disagree with any of our selections besides the #1 because that is as obvious as it comes.

1. BU(5)- While the general public drool over Gillies, Hellebuyck, and Demko , O'Connor and Maguire are returning from a season where they both got real hot for stretches and both posted save percentages over .910. While PC and Lowell may have one great goalie, BU has two great ones. The rest of lineup will fall into place with big jumps coming from Lane and Kurker up front.

2. Lowell-Someone has to finish 2nd to BU and it is tough to pick against Lowell is returning both goalies(even though Carr is only good at flopping now) and a majority of their lineup from last year's team that made it to the Frozen Four before choking against Yale.

New BU coach David Quinn and his staff picked up a top recruit for down the road today as they received a verbal commitment from Charlie McAvoy. McAvoy is a offensive defenseman currently playing for US NTDP U17 team. He is a right shot and considered one of the top defensemen in the 97' class. He will arrive at BU in 2015 most likely. He would become the second member of that class along with forward Bobo Carpenter and is a big get for the staff. He is considered to be one of the top dmen out there for that class. If I had to anticipate what Quinn's recruiting pitch was, it would be "You get to pass to Jack Eichel(2014 recruit) and he is going to score a lot of goals".

They won't be stopping here as they continue to build their classes for the future and look to fill out this year's team with 2-3 more forwards.


Proud to announce my commitment to Boston University. A big thanks to everyone who has helped me get to this point #GOTERRIERS
— Charlie McAvoy (@CMcAvoy44) August 13, 2013


Posted by quackquack at 5:24 PM No comments:

This afternoon, Sahir Gill made a surprise announcement that he would not be returning to BU for his senior season.  This comes as a shock to us as Gill was expected to be an impactful forward and a veteran leader for the club. The reasoning as to why he has left the team remains unknown. No matter what the reason, his presence will be missed on and off the ice this coming season. We wish Sahir the best of luck in the future and thank him again for taking the time to sit down for an interview with us in December 2011.

There are rumors that Gill will sign a professional deal in the coming days but the real reason behind his departure is not know and hopefully will remain that way to the public. I agree with twitter account @BurntBoats( on this one that this type of stuff should be kept in house and out of the public spotlight.That is the sign of a strong program and loyal staff when they can keep these things between the people directly involved.

“The Final Word” Or Not So Much…
Before I go any further, I’d like to thank the guys at BSRS for giving me a chance to rant a bit on their lovely blog, and I hope that I’ve been half as entertaining as the guys here are throughout the year(Editor's note: He/She must want something because we all know that we aren't entertaining).  To conclude my series of posts, I decided to get everyone excited about the upcoming 2013-2014 season.  What better way to do just than making a fool of myself and making some bold predictions for the upcoming season? I’m not a huge fan of predictions myself, but since there is so much uncertainty going into this new era of BU hockey I figured I’d give it a shot.  In a few months, make sure to bash me in the comments section when none of this comes true and you want to feel good about yourself for disagreeing with me now.

Anyway, since everyone  knows that I believe that BU is going to go all the way this season and Coach Quinn will be an absurdly great fit for the program, I’ll resort to some of my smaller scale predictions. The following ideas are in no particular order, and you are crazy if you try to figure one out:
Read more »
Posted by quackquack at 10:24 AM 2 comments: