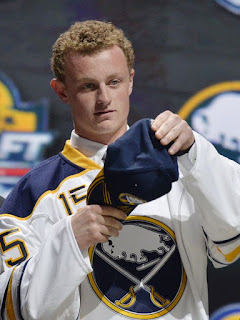 Four current/future Boston University Terriers were taken in the first 50 picks of the NHL draft this weekend. Star rising sophomore Jack Eichel was taken second overall as expected by the Buffalo Sabres where he will eventually join former linemate Evan Rodrigues in the organization. The second Terrier taken was Eichel's classmate,AJ Greer who went 39th overall to the Colorado Avalanche.Greer will most likely spend 2-3 more seasons on Comm. Ave before making the jump the professional ranks however. Jakob Forsbacka-Karlsson went 45th to the Boston Bruins and Jordan Greenway went 50th to Minnesota Wild. Both of them will be freshmen on the team this coming season and expect to make immediate impacts with classmate Maxim Letunov who was a second round draftpick in last year's draft.

Read more »
Posted by quackquack at 9:53 PM No comments:

The much anticipated 2015 NHL draft will take place this weekend in Florida where our boy Jack Eichel will be one of the top two picks. A lot of dumb Canadians are saying overrated CHL phenom Connor McDavid will go #1 overall and he probably will but that is more of a reflection of how dumb Edmonton management is than anything else. There are plenty of BU incoming freshmen and current players that have a chance to be drafted this weekend. The first round is Friday night with rounds 2-7 coming on Saturday starting at 10:00am. 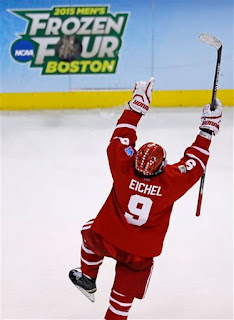 These 6 prospects are only a fraction of the great job Quinn and Co have done in the past two years on the recruiting trail as they look likely to have 2-3 first round picks in next year's draft as well as possibly top 10 picks in the following two drafts.

Jack Eichel told NHL.com that he has a pretty good idea of what he will do regarding going pro or returning college and will make a decision quickly following the draft. He really can't go wrong either way. The benefits of the NHL are obvious but everything indicates that Eichel is also seriously considering returning to school for a second season. As a BU fan, you obviously are hoping that he returns to Comm. Ave but he certainly can't be faulted for turning pro and if anyone says anything negative about his decision either way, they will feel the full wrath of BSRS.

The 2015-2016 schedule also was released this week.There are going to be some great non conference games at Agganis this year including Michigan, Denver, and Wisconsin Bentley. The Connecicut away trip to Yale and Quinnipiac along with Red Hot Hockey vs Cornell at Madison Square Garden are also highlight of the schedule along with the rest of the usual Hockey East foes including BC, PC, Lowell and the rest of the teams that suck. The only time the team will get on a plane will be the last weekend of the regular season when they travel to South Bend.