The BU Terriers split their Saturday/Tuesday home and home with the UConn Huskies with each home team holding serve on their home ice. On Saturday, BU played UConn even through two periods before taking over in the third thanks to some good plays to draw penalties and then taking advantage of those powerplays. Sean Maguire was solid in goal making 16 saves on 18 shots with neither goal by former BU commit Max Letunov being his fault. BU got a big goal from freshman Ryan Cloonan, who has been impressive thus far, early in the game to get on the board. BU would add powerplay goals from freshman JFK and sophomore dman Brandon Fortunato whose improved shot is notable if you watch him play and his stat line as he has already double his goal output from last year. Brandon Hickey added an empty net goal to solidify the final 4-2.

Read more »
Posted by quackquack at 11:58 PM No comments:

The BU Terriers responded from a less than 100% effort against the U-18 team on Friday with their first win of the 2015-2016 season Saturday night versus the University of Wisconsin. The Terriers' goalie Connor LaCouvee gave up a fluke goal early in the contest but the Terriers responded with four goals of their own  over the next 58 minutes. They would outshoot the Badgers 44-18 and dominate play throughout the contest. The tying goal came from senior Matt Lane who now has two goals in as many games. I'm not saying he is going to put one in the net everygame for the rest of the season but I'm not saying he won't either.

The game winner was from new found dman sniper Brandon Fortunato who scored his first goal of the season after working on his shot since arriving at BU. He was heavily criticized for his lack of a shot at times last year but that no longer seems to be an issue after he went bar down on Saturday. Chase Phelps and Bobo Carpenter added insurance tallies to make it 4-1. I thought Phelps played the best game of his collegiate career as he was all over the Wisconsin D and created numerous scoring chances before potting one off a Fortunato shot. Phelps seems set to have a big improvement in production from last year when he had 4 points in 38 games as a true freshman.

The BU Terriers host two opponents to Agganis Arena this weekend as they look to bounce back from their loss at Union last weekend.  The USA U-18 team aka BU Jr comes to town for an exhibition game tonight followed by lowly Wisconsin tomorrow for a game that counts unfortunately for the Badgers. The US U-18 team has four BU recruits for next season on it with forwards Clayton Keller and Kiefer Bellows as well as dman Chad Krys and goalie Jake Oettinger. All four of these players are projected to be first round picks with Oettinger not being eligible until the 2017 NHL draft. Keller, Bellows and Krys are 1,2,and 4 in scoring on the team filled with NCAA recruits. Oettinger is 4-3 with a 2.72 GAA. It should be noted that Keller, Bellows and Krys have each individually outscored their three BC commit teammates(McPhee,Walker, Campoli) combined and that Oettinger starts over Wohl in goal. Another notable on the U-18 team is BU freshman Jordan Greenway's younger brother JD who is still uncomitted. As a defenseman, it is hard to see him coming to BU for next season with the guys they got coming already(Krys, Fabbro, Kolias) but Quinn never seems to have too many top end defensemen so you never know. This game will certainly be the more competitive game of the weekend and should be a good test to see how BU has improved it's d-zone coverage since last weekend where they had a few breakdowns.

Read more »
Posted by quackquack at 10:04 AM No comments:

The BU Terriers dropped their season opener 5-3 to the Union Dutchmen out in Schenectady, NY last night. Union scored the first goal of the night on a rebound powerplay goal by Ryan Scarfo. after an AJ Greer slashing penalty which the coaching staff probably wasn't a fan of since it was 200 feet away from the BU goal.  BU bounced back with goals from senior Matt Lane and freshman Ryan Cloonan(his first collegiate goal) on nice plays by Doyle Somerby throwing the puck on net to set up rebound opportunities. The game was a different story in the second as goalie Sean Maguire was forced to stand on his head at times and made one of the best glove saves I have ever seen. Union would eventually put two more past him, one in the late second and one early in the third. BU would eventually tie the game up on Charlie McAvoy's first collegiate goal as he jumped into the rush to bang home the game tying goal. BU's d-zone coverage would fail to keep Union off the board as senior captain Matt Wilkens scored the game winner off a rebound from Maguire and Union would add an empty netter to end the game with a 5-3 win.

Overall, I thought the team played better than they did against Acadia in the exhibition game and there were plenty of positive to take from the game. Coach Quinn seemed to have a similar attitude and he is much smarter than me so it must be correct. Union had 6 powerplays to BU's 2 which was a huge advantage for the home team who definitely got the benefit of the doubt on a few 50/50 calls. I am not saying the refs cost BU the game but they certainly didn't do them any favors. I thought Charlie McAvoy was way better than he was in the exhibition game even before he scored the game tying goal in the third. There was a sequence on the powerplay where he walked the puck in the from the point past three Union penalty killers and dished a slick pass that just missed being buried by O'Regan and Greenway. Jordan Greenway was also a huge physical presence down low as he basically did what he wanted with the puck. He is going to be a force for the Terriers this year for sure. I still love the third line of Olsson Lane Carpenter as they keep the game simply and generate scoring chances while being physical with the opponent. Coach Quinn will certainly have some tough decisions to be made on defense with it seeming that Brandon Fortunato will return to the blue line this weekend after missing the game Saturday for a violation of team rules. His fill in, Shane Switzer, was very solid in his collegiate debut and certainly did nothing to warrant being pulled from the lineup. Fortunately for Quinn, Friday night is an exhibition game so he can dress 7 D and Saturday he could dress 0 D and still beat Wisconsin since they are garbage.

Read more »
Posted by quackquack at 2:45 PM No comments:

The BU Terriers beat the Acadia Axemen 4-2 in an exhibition game this past Saturday. There was definitely some rust as practices could only formerly begin on Saturday morning. I thought most of the freshmen specifically JFK and MacAvoy looked slow in the first period. JFK obviously picked up the pace as the game went on with two nice goals(see below) and I wouldn't rush to make any judgement until we have seen a few regular season games. The third line of Olsson-Lane-Carpenter may be the most physical line in all of college hockey this year but every one of them could score 10+ goals as well. The fourth line consisted of Ryan Cloonan, Mike Moran and Chase Phelps. Dillon Lawrence and Tommy Kelley also saw time up front and I expect Nick Roberto will be back to battle for the time in the bottom 6 forwards after being held out this weekend.

The six defensemen consisted of Hickey, Somerby, Diffley, MacAvoy, Switzer, and Macleod. Out of those six, Macleod probably played the best but again it is still very early. I thought  Shane Switzer also looked very good and is going to make it a tough decision which six to dress going forward assuming Brandon Fortunato isn't injured. It will be interesting to see what lineup Coach Quinn dresses this Saturday as the Terriers travel to take on the Union Dutchmen. The only definitive guy who won't play is captain Matt Grzelcyk who is skating but doesn't appear to be ready to come back at this point.

In other HE news, both BC and UVM lost their exhibition games which doesn't mean much unless you believe the hype about how great BC is this year.


The full hour long episode of the Season II will be played on NESN the following times(10/8-4pm, 10/15-9pm, 10/20-7pm, 10/29-3pm) and is also available to be watched on Youtube as well(Part 1, Part 2 and Part 3). It is definitely worth a watch for any BU fan who enjoyed the ride from last year. If you don't love last year's team and the coaching staff even more after watching it, then I don't want to. It is worth the watch on it's own just for this visual below after BU clinched it's place in the Frozen Four up in Manchester last March.

Posted by quackquack at 10:09 PM No comments:

Hockey season begins for fake this weekend when BU takes on Acadia in an exhibition game this Saturday afternoon at 4:00 pm. Last season the Terriers introduced their high scoring offense to St. Thomas with a 12-1 beatdown. The Terriers hope to start off this season the same way as they take on some 24 year old dusters from Canada. The lineup Saturday night will not be indicative of what it looks like a week later when the Terriers travel to beautiful Schenectady NY for their season opener against the Union Dutchmen. Acadia is 3-0 so far in their season games against Moncton and Brock. Those don't sound like real teams so I'm not too concerned about them being even close to the level an average NCAA hockey team. Also, Acadia has 16 players on their roster who played in the CHL which basically means that 16 of their players will have little to no interest in playing any form of defense. 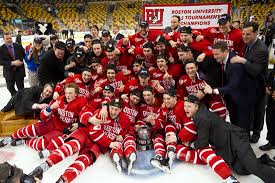 This should not be a big test for the BU offense who return three 30 point scorers(Grizz, Oksanen, and O'Regan) from a season ago. Robbie Baillargeon also scored 30 points two years ago before mono set him back last year. The three returning 30 point scorers is tied for the most of any team in HE with Lowell. Providence and Northeastern return two while BC and Merrimack return 0. BU is the only one of those teams to return their entire defensive corps while also adding a future first round pick in Charlie MacAvoy. Needless to say BU has a wagon for this coming season despite BC being the sexy preseason pick to win the league. Bracco, Wood, Dudek and Co may be decent freshmen at the bad end of Comm Ave but they are not Jack Eichel so I am not sure why people are acting like they will turn a mediocre team who lost their top two D around to a league champion. Lowell can't stop anyone either and Providence has serious questions in net with the departure of the devil himself Jon Gillies. This is BU's league to lose this year and anyone who pretends otherwise probably drank lead paint as a child.

Read more »
Posted by quackquack at 11:19 AM No comments: