Denver Recap: "What Does 5-on-5 Hockey Look Like Again?" Edition

Hooooooo boy. While a lesser blogger would still be in the fetal position trying to erase last night from memory, here at BSRS we are men of action. Which is why I started drinking unhealthy amounts of alcohol in the third period of last night's BU loss at Denver, and continued until approximately 3 am. Last night's loss was, by far, the worst BU hockey I've had the displeasure to witness not just this season, but probably in at least a year. It was an absolute disaster from start to finish. I'm still too rattled to provide a fully organized recap, so here are some of the notes I took during the game, followed by a quick review at the end. I'd like to personally thank the local deli and Dunkin for providing me with an egg sandwich and coffee, without which this post could not have been possible.

Blown elbowing call on a shoulder to shoulder hit just because the Pioneer crumpled to the ice. Not a good omen.

Denver PP goal at 4:59. Following the goal, the game immediately gets out of hand for the next 12 minutes. A big thank you to the zebras who thought Laners shoulder to shoulder hit was an elbow. Horrible call but on the bright side, I'm learning more about human anatomy than my physiology class ever taught me. 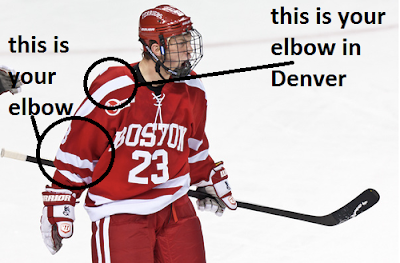 DU controlled the next ten minutes easily. Worst hockey I’ve seen from BU since the first game at the Whitt in October.

Second line was the lone positive point about the first period, especially in the last 5 minutes. BU was BUZZING big time to close out the period but a couple of bouncing pucks and a couple of very nice saves by Olkinuora kept the terriers scoreless after one.

Just really deplorable play all around. On our heels in the D zone, no pressure against the DU forecheck, bad passes, bad decisions, bad energy. Every in-zone possession for Denver looked like a powerplay because we tried to collapse into the slot and give them all day and plenty of ice to cycle. Obviously didn’t work. Pluses: breakout was good in the first and last five minutes of the period. What little time was spent in the offensive zone was solid.

Early in second period, BU buzzing much more than the first period. Fully controlling the first 5 min. Olkinuora making great saves. Kurker got in alone point blank, deked out the Finnish tendy and somehow missed the backhand wide at a gaping net.

DU forechecking hard, causing a couple of problems early but terriers get lucky and remains 1-0.

BU with multiple grade-As and very close chances, including 2 shots off the mask of olkinuora so far in the game.

Denver consistently outplaying BU along the boards. Not sure if it’s physicality and strength or quickness and pressure with slow terrier decision making, but BU having lots of trouble in scrums.

Megan missed the net 3 fucking times all alone 1 on 1 in grade a chances against Olkinuora. MAKE HIM MAKE A SAVE.

Danny Boy goes for slashing and Denver quickly capitalizes. A tic-tac-toe passing play embarrasses every human being wearing scarlet on the ice before undressing OC (not in the good way) for the easiest goal ever in an open net. I’m now calling liquor stores to see what’s open nearby.

These Denver announcers are intolerable. They’ve said “Casey Hohmann” about 8 times so far. Denver commentator: "and a slash here, as Arnold just had the stick just eviscerate in his hands". If anyone can explain how a long stick of carbon composite material can "eviscerate" in someone's hands and make it make sense, I will eat my hat. Idiots.

All of the liquor stores are closed, I will be retrieving beer from 7-11 presently. FUCK THIS:

To close it out, here is a visual representation of BU's effort last night.

And on that note, this game never happened and I can't wait for Jan 4 vs RPI to finally watch some BU hockey for the first time in almost a month.

Posted by HatTrick Swayze at 2:47 PM