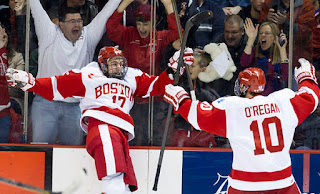 The BU Terriers took 3 of 4 points from the Providence Friars this past weekend with a road won Friday night and hard-fought tie Saturday night. I'll start with Friday night where the Terriers put themselves in a quick 2-0 hole due to defensive breakdowns that left Sean Maguire hanging. They hung in there and grabbed a goal late in the first on an Evan Rodrigues wrister that beat PC goalie Jon Gillies low. This was the turning point of the game for BU as they entered the first intermission. Rodrigues would strike again in the second to tie the game 2-2 on a backhand that slipped through Gillies somehow. Rodrigues was falling down as he shot which set up for an awesome celly that you can't see on the highlights. He was basically sliding on his stomach fist pumping to the boards. The Terriers had a scary moment in the third as Rodrigues went down a check into the boards and left the game. Coach Parker said after the game that his hand may be broken but it turned out to be badly bruised and I would expect Rodrigues to return to the lineup either Friday @ UMass or Monday for the Beanpot vs Northeastern. BU picked up the intensity after the hit and Sahir Gill scored the game-winner on a slick back-handed wrap around goal.  The 3-2 final was a big win for the Terriers, who were tied with PC in Hockey East for 3rd entering the weekend.

Saturday night was another hard-fought effort that eventually ended in a 3-3 tie. BU opened the scoring on a rebound goal by Ben Rosen off of a Matt Lane shot. Lane did a great job to get the shot off and keep it low to create the rebound opportunity. Rosen just outmuscled the defender for the puck and got it to go in the net. PC tied it later in the first on a Myles Harvey slapper from the point that Matt O'Connor never really saw. It went 5-hole. PC took the lead in the second on a bad Sam Kurker turnover in his own zone. Kurker rebounded well from the play though and had some good chances later in the game. The Terriers tied it up on a 5 on 3 goal from Matt Nieto who scored while all the incompetent fans were yelling "shoot" which made it that much sweeter I'm sure. PC took the lead less than a minute into the third when Shayne Luke beat OC top shelf on a rush. BU continue to fight back and scored to tie late in the third. Danny O'Regan scored on the wrap around which was originally waved off but reversed under review. Ryan Santana was in the crease but was being held there by the PC defenseman, which caused the review because the puck clearly went in the net. BU was forced to kill off 2 penalties after the goal but had some solid chances of their own in the last minute on some Ryan Ruikka one-timers. Overtime was controlled mostly by BU but both teams had solid chances in the last 10 seconds to win the game. A Friar missed the net on an in close chance against O'Connor and Matt Nieto was stuffed by Gillies on a wrister as time expired.

This was a big weekend for this team to bounce back from 2 losses last weekend at the hands of Northeastern and Lowell. They did it without assistant captain Garrett Noonan who was suspended for a "spear" of Lowell goalie Doug Carr last weekend. They also did it Saturday night with Rodrigues whose hand was badly bruised from the night before. Forwards Matt Nieto(who has 9 points in his last 6 games), Danny O'Regan and Sahir Gill really played well this weekend offensively along with Wade Megan and Cason Hohmann. Senior forward Jake Moscatel is really bringing a physical presence to the 4th line for this team. This team continues to fight back when it finds itself in holes and shorthanded which you have to love. This weekend is big as they have a important conference game Friday in Amherst before returning to Boston for the Beanpot 1st round game on Monday with Northeastern.


BU now sits tied for 2nd in HE with UNH at 21 points. BC is in first with 23 points despite being swept by last place Maine over the weekend at home. BU has a game in hand over BC so it could be a tie for 1st once that game is made up. UNH has a game in hand on BU and two games on BC so they have an opportunity to grab first place as well. They are also struggling as they split with Merrimack over the weekend. It seems like the yearly  UNH second half collapse is starting to occur up in Durham. PC still only sits 2 points back in 4th with Lowell and Merrimack one point back of them. The top 6 teams in Hockey East are now all within 5 points of each other so it is very important for BU to continue to pick up conference points. They return to action Friday to go for the season sweep @UMass. They swept a home and home with the Minutemen back in October.  The Terriers sit in a t11 in the Pairwise rankings which change with every game this time of year but currently they would be a 3 seed in the NCAA tournament.
Posted by quackquack at 9:07 AM